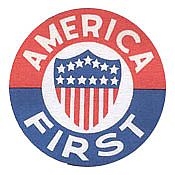 To make sure the U.S would stay neutral and isolated during the war Congress passed Neutrality acts to would ensure that America would not get involved in the war.


NEUTRALITY ACT OF 1935~  allowed the president to stop the shipment of arms and forbid U.S. citizens from traveling on the ships of other nations

NEUTRALITY ACT OF 193~ Stopped the shipment of Arms to Spain during the civil war.


There were also committees set up such as the America First Committee that spoke up against war and foregin entanglement.
Powered by