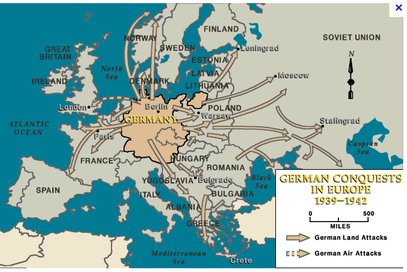 The U.S.  policies of isolationism allowed Hitler to gain control over much of Eastern Europe. With out the US involved the league of nations was weak and would not really control Germany.  The league adopted a policy of appeasement were they allowed Hitler to get away with small acts of aggression and expansion, like when he built an air force, or  when he ordered troops to march to Rhineland. But when Germany tired to invade Sudetenland the U.S. got involved and told the league to meet with Germany and work something out to maintain the peace. So they held the Munich conference , where they ended up letting Germany have Sudetenland.  The U.S involvement made many Americans angry because it went against the policy of isolationism.


Europe didn't really anticipate war because they figured if Germany tried to any further that Stalin communist leader of the Russia would have stopped him. But in 1939 Hitler and Stalin signed a non aggression pact, and soon after Germany invaded Poland , Denmark, and Norway.  After the attack on Poland the Axis Allies declared war.
Powered by